Are you planning to go on air travel with your dog, just adopted an older canine from the rescue center, or maybe you’ve never considered training your furry friend but now have a reason to do so? There are countless reasons to crate train an older dog.

However, like many dog owners, you may be wondering whether it’s possible to kennel train your older dog, especially considering the old belief that “you can never teach an old dog new tricks.” Well, there’s very little truth in this saying, and as far as crate training is concerned, any dog, a puppy, adolescent, an adult, or senior can still learn how to stay calm in their kennel and enjoy the benefits.

An older dog may adjust to the training quicker than you think because of the coziness and privacy that crating provides. Similarly, your furry friend from the rescue may not be hard to train since most of them stay in kennels while young. As a result, you don’t have to be pessimistic about training an adult dog since it’s not always a challenge.

However, the process will generally take you longer than the time required to train your puppy. That’s because an older dog already has habits he’s used to, while a puppy is still learning and forming his lifestyle.

Crate training an older dog is possible, but it takes a little more patience and a positive mindset. First, understand that your dog has already formulated his way of life and is now used to certain habits. Crating him may mean cutting off some of these habits, which, as expected, will face resistance.

Similarly, some adopted dogs may have had a negative experience with crates, where the caretakers used the kennel as a way of punishment or to keep them away. However, you may also be surprised that the adopted dogs may already be used to the crate and won’t freak them out. Whichever case, you can successfully crate your dog if you put patience and dedication into training.

What Sets Crate Training a Puppy and An Older Dog Apart?

There’s not much difference in the method used to train a puppy and an old dog. When crate training an older dog, the primary concern is that you’ll need more patience as it may take your adult canine a few more days or weeks to get the hint compared to a puppy.

First, puppies learn faster than older dogs. As a result, it may take you fewer days to instill the concept in their system. Similarly, they aren’t as forgetful as adult dogs. Thus, you won’t have to keep repeating and going back to the previous step during the training.

Again, almost all adult dogs resist being confined compared to puppies. That’s because a tiny pup is in her learning stage, excited and curious to learn and experiment. As such, she will gladly take your lessons positively and adapt to the routine you set.

On the other hand, an older dog is already used to a given routine, and the training may mean making him unlearn some of the habits rooted in his lifestyle and implanting a new trend. As usual, your dog will try to resist anything that denies him the comfort of his lifestyle.

Again, adopted dogs sometimes come from harsh environments where their caretakers used crates to punish or prison them for hours on end. If all this happens without proper training, and maybe using force, it may make them develop aggression towards crating, making your work even harder.

However, it’s not always doom for adult dogs. Sometimes older and calmer dogs may fall for the cozy and privacy that a crate offers quicker than a puppy. Again, some adopted dogs are lucky to be crate trained in their centers, meaning you don’t have to train them at all. However, you need to prepare for the task mentally and ahead of time since it may require a height of patience and positivity.

How to Train an Older Dog

There’s no significant difference in the method you use to crate train an older dog and a puppy. However, there are a few things you may want to put in place before you start the process. First, select the best dog crate based on the size and design that are most suitable for your pet. A dog struggling with separation anxiety, for instance, may require a heavy duty dog crate to resist them if he tries to escape due to panic.

Similarly, size is essential. Dogs feel more secure in a crate that fits them well. Since they’re den animals, your dog will appreciate relaxing in a tight space rather than an overly large crate. A giant crate may lose its den-like feel and essence, while a miniature crate may be insufficient for your pooch. An appropriately-sized kennel will also help you in potty training, as dogs naturally want to keep the spaces they sleep in clean.

You can consider a DIY crate since they are easy to customize to your needs. Also, aim to lure your dog into the crate and get him used to the structure before starting formal training and without force. Here are some steps to guide you.

Dogs are quite sensitive to human emotions and will quickly adopt the mentality you have. Now that you want to get your dog to use the crate, eliminate any negative feelings you have on the structure process. If you’re optimistic about what you want to do, your dog will emulate your positivity. Thus, only start when you’re mentally ready, relaxed, and believe it’s possible.

A crate, therefore, can be a useful tool in teaching your dog to control his bowel movements. As a general rule, a dog crate should be big enough to allow your dog to stand, turn around and sleep comfortably. Any extra space beyond that may be too large for your four-legged friend.

Again, remember to make the crate cozy to attract your older dog. Adding beddings or blankets in the kennel will make it warm and welcoming to senior calmer dogs. Additionally, consider covering the crate on both sides, leaving the door, to increase privacy. However, this process can wait till your dog gets used to his crate.

Encourage a Positive Association between the Dog and Crate

This part is the most critical of all, and can have a large impact on crate training success. Before you embark on formally training your adult dog, you should first consider building a relationship between the dog and the crate.

This step may take you a lot of time, depending on your dog’s personality and resistance. Here, encourage your dog to get inside the crate willingly and in his own time. You may have to repeat the steps, but be patient until your dog is ready to move to the next step. Avoid using force to drag him inside, especially if he’s had a bad experience with crates in the past or has never been in a kennel. Here is the procedure to consider:

What if the dog refuses to go into the crate?

Your dog may refuse to get into the crate after a few days of luring. If this happens to you, try these steps.

What if my dog is stubborn and won’t go in?

Sometimes your dog may refuse to buy your idea after all the attempts. You can consider disassembling the crate to remain with the base tray only. Lure him to the tray by adding a few treats there. If he falls for it, bring his beddings into the tray.

Build the three sides and roof of the tray a few days later, excluding one side, and continue luring him into the tray using treats. As you advance, you may assemble the whole crate, leaving only the door. Continue adding treats and your dog’s favorite toys to the crate.

Entice Your Dog More in the Crate

Once your dog is content going in and out of the tray, make everything he loves exclusively available there. Serve his meals in the crate, give him special treats and favorite toys. Keep this rule since offering these goodies elsewhere will encourage your dog to wait for them somewhere else and reject the crate.

Once you’ve succeeded in creating a positive association between the dog and the crate, you can proceed into instilling crate training discipline. This phase is the same as crate training a puppy, and all the knowledge you’ve ever acquired either from dog training books, articles, and other sources apply.

However, be skeptical about any method that promises you results over one weekend. Again. Listen to your dog, and abide by his pace. If he shows any sign of distress or your dog is whining in his crate, you may be hurrying things, and it’s time to halt, take a break, and start over again or repeat the step.

Can older dogs be crate trained?

Yes, you can crate train an older dog. Dogs of any age can still learn how to use their crates and enjoy the advantages of training. However, you’ll need more patience since your dog may take a little longer to learn compared to a puppy. As it is, training an adult dog involves breaking his lifelong habits, and you may face resistance.

Is it ever too late to crate train your dog?

It’s never too late to train your dog, and your furry friend can still learn the trick despite his age. However, it may take a little longer to make an adult dog comfortable in his crate, especially if he has never had the experience before or has had bad crating experiences. Thus, you need a lot of patience and positivity to make him love and willingly get in and out of the crate before you start training him formally.

How do you crate train an old dog with separation anxiety?

Crate training a dog struggling with separation anxiety may take longer since he won’t readily accept the kennel, but it’s possible. Take your time to build your dog’s confidence and comfort inside the kennel. You can lure him with treats and serve his meals there to make him view the kennel positively. Once your dog can comfortably and willingly stay in the crate, close the door with him inside for a few seconds and open it. Repeat the process daily, increasing confinement duration till he’s okay inside the crate.

How long should a dog be in a crate?

As a general rule, you should avoid crating your dog when you’re at home and can stay with him. However, if you have to, experts recommend not confining your dog continuously for over three hours, unless it’s overnight. Even so, you should keep giving your canine frequent breaks (at least every 6 hours). Canines can hold their bowels for 6 to 8, but the story is much different with small dog breeds, puppies, and older dogs, as they’re more likely to require more potty breaks.

Previous Post: « Broken Dog Tail? Here’s What You Should Do
Next Post: 5 Games To Play With Your Dog [Fun And Mentally Stimulating] »

About The Pampered Pup

The Pampered Pup was created for dog lovers by dog lovers.

Our team of experts share their experiences in dog ownership and in-depth analyses of today’s most beloved pup products to help you bring life to those special moments with your dog that you’ll cherish for a lifetime. 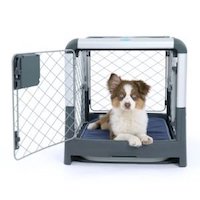 Get Your FREE eBook!